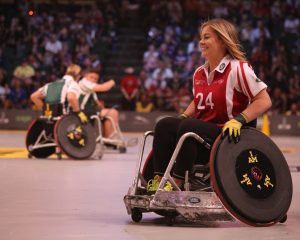 There have been several forms of research carried out on the attitudes displayed by non-disabled persons when disabled persons were included in the same type of activity with them. However, a particular study stood out and it was carried out by Activity Alliance. The results proved that there has been a significant improvement, and the barriers now stand a better chance of being changed, as persons with disabilities are now being included in sporting activities and finding more opportunities with a school for the physically handicapped.

When it came to taking part with differently-abled people, an online survey was conducted to gather over 2000 non-disabled persons’ views on the matter. However, the survey maintained its focus on activity inclusion in which both took part as a team. And it went on to examine not only the experiences but also the perceptions of all the respondents.

As such, the results indicated a mixture when it came to the participating persons’ perceptions and it also indicated that their thinking was also keeping them from going into a mixer. And this led us to a conclusion that there was a gap which could be filled with a change in perception through sporting activities.

Roughly 73% of the people surveyed were in fact open to the idea of recreational and sporting activities in a mixed setting. And it also led them to have a sudden realisation that it would also positively impact on their lives as individuals, and 60% agreed that they would also learn a great deal about differently-abled people. 57% were thrilled at the idea of meeting new people and 44% admitted that they felt more comfortable around disabled people.

Additionally, around a quarter of the participants associated differently-abled people as being equal when compared to non-disabled persons. However, when asked about groups experiencing prejudice within the UK, most believed that those who had learning disabilities, behavioural conditions, mental health problems and physical impairments experienced them the most. As the survey progressed, the majority were concerned with the possible negative impacts their participation would have on disabled individuals when they participated together.

53% were concerned that differently-abled people would feel patronised, 47% felt that disabled people would somehow become hurt during activities and around 37% felt that non-disabled people could go on to say something extremely inappropriate. There is a known barrier in language and the terms used. Before the survey, roughly 67% of those taking part didn’t even know what the term “inclusive” meant. And 74% indicated that it was for everyone rather than a segmented group of individuals.

The results presented by Activity Alliance has also shown a growing portfolio when it comes to exploring and researching more on the barriers faced. The findings gave light to how easily there was a mismatch due to the lack of opportunities for differently-abled people. As such, at least six out of ten said they would like to participate in a mixer for both. However, only five actually participated in such events.

Due to the survey, a great amount of differently-abled people indicated that they would respond in a positive manner to any opportunity to become active. And they were interested in the things which had value to them. They were focused on creating lifelong friendships, becoming more independent, keeping their health in check and progressing in their personal and professional lives.

Next Steps for Activity Alliance

According to the chief executive of Activity Alliance, Mr. Barry Horne, in order to increase the opportunities for differently-abled people, they needed to respond to the plight. He also indicated that there was a great deal of people who want to become more active with non-disabled people in a mixed setting. And as he worked with his team to improve the issue, he pleaded with other providers to look beyond segregation and create something better for everyone.